<< Back to Learning Zone

Hardwired: How Our Instincts to Be Healthy are Making Us Sick [book review] 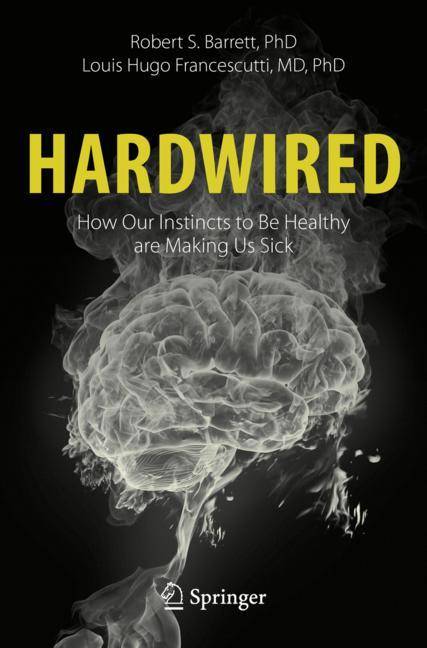 Hardwired: How Our Instincts to Be Healthy are Making Us Sick

The central paradox tackled in ‘Hardwired’ is that, despite living in a time with unprecedented access to information and knowledge about how to make better health choices, many do not follow this advice and suffer poor outcomes.

The two Canada-based authors; ‘Dr Rob’, a social scientist, and ‘Dr Louis’, a medical physician, consider several aspects of modern life and explore the evidence and their beliefs about why the discrepancy may exist.

Much of the discussion centres on how brain chemistry can be a driver for poor health choices. A theme that is explored, through chapters covering topics such as food cravings, screen time and social media, is how chemical ‘highs’ in the brain from sugar, social media ‘likes’ or stimulating screen time can reduce over time as our brains become attenuated to stimuli, leading consumers to need more fat or sugar, more likes, or more extreme media to achieve similar levels of the chemical responses they crave.

The authors suggest that technology has created changes in society so vast, and in such a short time frame, that humans have been unable to evolve fast enough to make the right choices in our ‘complex ecosystem’.

The book’s title is slightly misleading. The argument proposed is that we know how we should be healthy, but we don’t yet understand what stops us making better choices. But the title may lead the reader to expect an exploration of choices we make that we think will be ‘healthy’ but actually cause ill-health.

The writers tend to have a north American focus, although research from around the world is occasionally discussed. While being an interesting commentary on north American issues, as a UK- based reviewer, their cultural lens is particularly notable during discussions around healthcare systems in chapter one (hospital errors) or when discussing use of medication for attention deficit issues in children.

National differences are acknowledged at times in the book, but not always, potentially making it less relevant to non-American readers, particularly those in countries with centralised healthcare systems that are mainly publicly funded.

Given the number of themes considered in a relatively short book (156 pages), it does pack a punch in terms of knowledge gained [Elizabeth Bradshaw]

Given the number of themes considered in a relatively short book (156 pages), it does pack a punch in terms of knowledge gained. More detailed discussions would exist on similar issues in isolation. However, this book gives a good overview of some key issues and ties in well with common narratives about the physiological and psychological drivers that may lead people to make poor health choices.

At times, the pace of moving from issue to issue can feel disjointed, with one or two very clunky gear changes. In the chapter on childhood, for example, the authors discuss potential long-term brain impacts of childhood abuse or prolonged stress in childhood, considering extreme examples such as childhood slavery or war. Recent devastating conflicts in Syria and Democratic Republic of Congo are touched on, with a linking paragraph then comparing ‘stress’ on young minds that digital screen can cause which did not feel wholly measured.

Discussion tends to centre on biological instincts and drivers without always mentioning potential sociological factors. For example, any financial barriers to accessing healthy food are not really considered in the chapter on diet. The book concludes with a chapter on ‘Pandemics to Prosperity’ which feels extremely timely (and hopeful)!

While those seeking to explore single issues in depth may find the discussion somewhat brief, given its length this book provides a really interesting overview of factors contributing to challenges currently facing human health and wellbeing, as well as providing some very interesting contrasts of 21st century health issues with those experienced historically.

Switching Your EHR System Has Never Been Easier

Nov 30, -0001
Read More
Serving your patients and your business with Motioncare