The practitioners behind south London-based Kennington Osteopaths & Physiotherapy are about to see their ambitious plans to open a second clinic in the area come to fruition.

Osteopath Andrea Rippe and Pietro Susini – who is something of a rarity in being both a physiotherapist and an osteopath – will open the doors of Elephant Park Osteopaths to members of the public for the first time in October.

Despite his particularly hectic schedule, Pietro found time to tell PhysioUpdate editor Ian A McMillan more about the new venture and his unusual professional background. 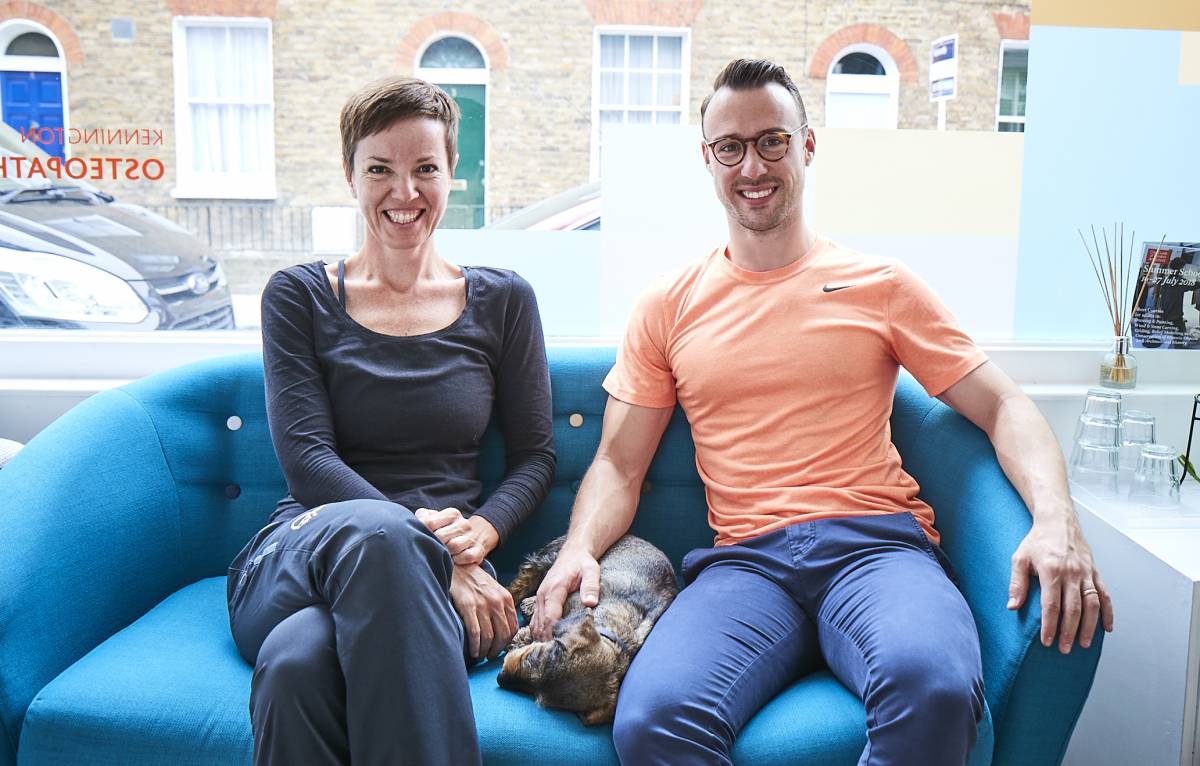 Andrea and Pietro are joined on the couch by their 'little mascot', Tina the dachshund

Stepping stones to a succesful partnership

Could you tell us a little about the background to the business? ‘Andrea founded Kennington Osteopaths & Physiotherapy in 2012. I started working as one of her associates in 2014 and we bonded straight away. The business was growing, and she was finding it very hard to run it on her own,' Pietro explains.

‘I had always wanted to have my own business and was in the lucky position to have saved some money that I could invest into such a project – Andrea was thrilled at the idea!

‘Then in 2016, after a year of negotiation and accounting meetings, I bought 50 per cent of the business and we have run it together since.’

From Florence to London

‘I decided to integrate my physio training with osteopathic training as I felt the need to achieve better hands-on skills to be able to get a deeper understanding of the body tissues’ condition and hence to treat their dysfunctions.'

In his practice, Pietro blends elements from both disciplines to provide patients with what he calls ‘the highest quality treatment’. He works using traditional physiotherapy as well as dry needling acupuncture.

A fascination with rehabilitation

In 2016 Pietro became more involved in training undergraduate osteopaths and was appointed as a clinic tutor at UCO, co-running the Blanchard HIV specialist clinic.

‘I have always been fascinated by the meaning of the word "rehabilitation" – by the process of bringing back to full function something that is broken, or damaged or injured,' he explains.

Pietro's background in horse riding gives him some special insights, he says. 'Having been a competitive horse rider for many years allowed me to understand the importance of keeping a healthy body and asking for help from professionals when an injury stopped me from performing as I wanted.

‘In the equestrian world this applies to your horse's body too! I used to have my horse treated by acupuncturists, massage therapists and physiotherapists. This is when I decided that, at some point, I would become an equine osteopath myself.’

Pietro – who completed a post-graduate diploma in equine and canine osteopathy in 2015 – says he only gets the chance to practise equine osteopathy ‘sporadically’ – ‘as a way to escape to the countryside and be close to horses’.

We have been working on this project for about a year now and are very excited to see it coming to fruition soon. It will mean be a lot of work, so wish us luck? [Pietro Susini]

Already having many feathers to his bow has clearly not dimmed Pietro’s ambitions. What drives him?

'Unfortunately, the urge of owning my own business wasn't satisfied by buying into one! (ouch!). Three years down the line I felt that the fact that I hadn't started the business myself was impacting on my drive and passion – even though the business was flourishing.’

Pietro says he made a promise to Andrea: if they expanded the business, he would do the ‘heavy lifting’ required to set up a new clinic. ‘In reality,' he explains, 'we have done pretty much everything together – we feel very lucky as we tend to agree almost on everything!

‘We have been working on this project for about a year now and are very excited to see it coming to fruition soon. It will mean be a lot of work, so wish us luck?’

What makes their practice stand out from the hundreds of other physiotherapy and osteopathy clinics in London ?

Pietro replies: ‘We hold very high standards of work ethics and reward our practitioners and administrative staff as best as we can for their job. The vibe at the practice is inclusive and it's a lot of fun to come to work!'

How to make your private practice 'LGBT friendly': physiotherapist Rachael Machin offers some advice
Read More
'A busy and vibrant clinic': down on the farm with Tracey Miles
Read More
Meet Mo Alvi: a physiotherapist and business owner with a passion for working with people
Read More
In a PhysioUpdate Q&A, Fiona Moir discusses goPhysio – the business she runs with her husband Paul
Read More
<< Back to News
By using our site, you acknowledge that you have read and understand our Cookie Policy and Privacy Policy.