Physiotherapists have helped to develop a ‘completely new behavioural intervention’ for treating people with knee osteoarthritis (OA), according to a paper written by team of researchers based in England.

The ‘cognitive muscular therapy’ intervention – which brings together ideas from the disparate fields of pain science, biomechanics and health psychology – can be delivered by physiotherapists, the team notes. 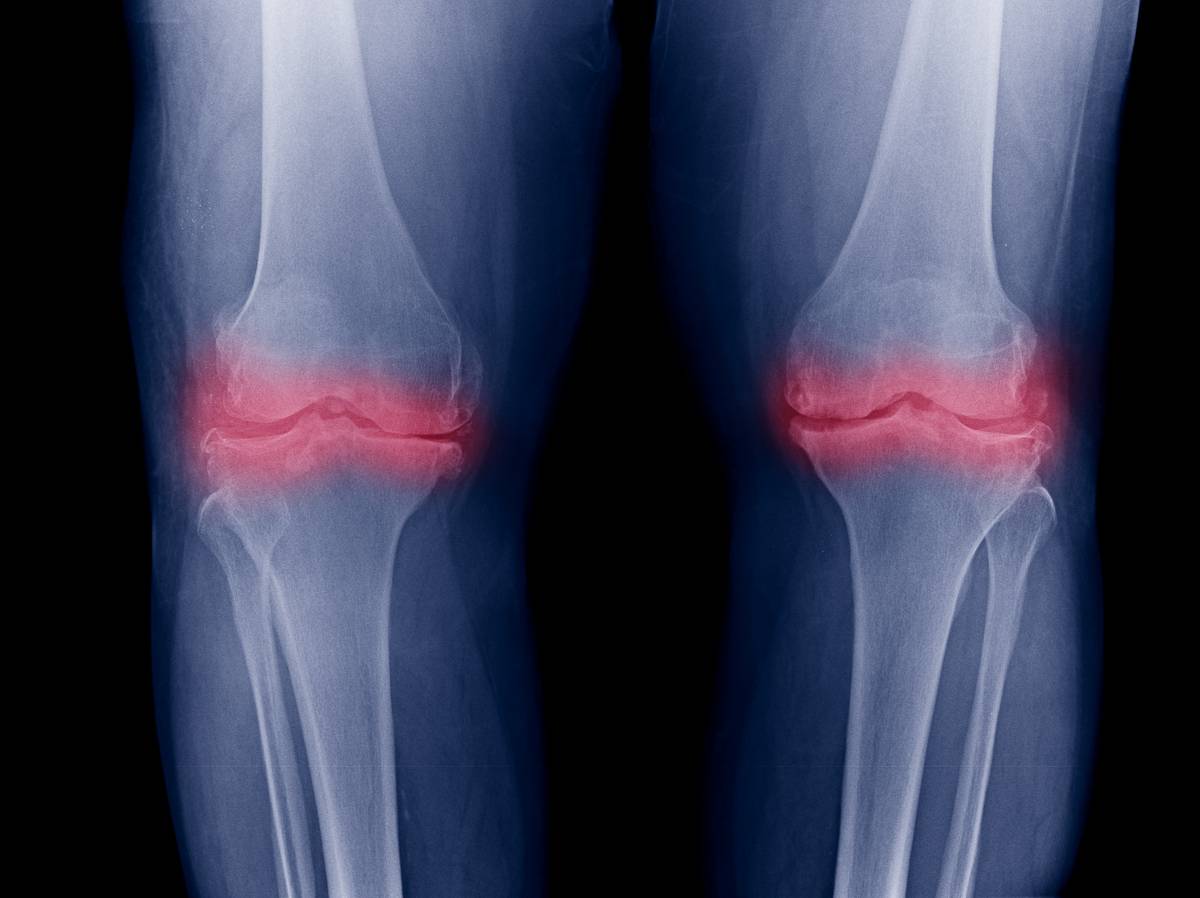 Photo Credit: Shutterstock
One person in 10 aged over 55 has been diagnosed with knee osteoarthritis (X-ray scan)

The approach is outlined in an open-access paper, titled A new integrated behavioural intervention for knee osteoarthritis: development and pilot study, that was published earlier this week by the journal BMC Musculoskeletal Disorders.

We aimed to create a new behavioural intervention, which integrated psychologically informed practice with biofeedback training to reduce muscle overactivity, and which was suitable for delivery by a physiotherapist [Dr Preece et al.]

Treatment sessions delivered by a physiotherapist focused on changing muscle patterns and teaching patients how their beliefs and behaviours can influence how pain is experienced. The paper says there is an ‘urgent need’ to explore conservative ways to manage knee OA, given that obesity levels (a known risk factor) are rising and that one person in 10 aged over 55 years will be diagnosed with the problem.

The team aimed to make the approach consistent with the capability, opportunity and motivation (COM-B) model, which they point out has been recommended for promoting behavioural changes at an individual-level.

In a section on the study’s background, exercise-based approaches are said to have been a ‘cornerstone’ in the management of knee OA by physiotherapists for many years. ‘However, clinical effects are considered small to modest and the need for continued adherence identified as a barrier to clinical efficacy,' the authors note.

‘While exercise-based approaches focus on muscle strengthening, biomechanical research has identified that people with knee osteoarthritis over activate their muscles during functional tasks.

‘Therefore, we aimed to create a new behavioural intervention, which integrated psychologically informed practice with biofeedback training to reduce muscle overactivity, and which was suitable for delivery by a physiotherapist.'

Patient feedback, captured during the last in a series of co-design workshops, was ‘universally positive’, the paper states. ‘Patients reported that the intervention allowed them to understand and challenge the way they move and react to pain. They also described the process as allowing them to “create a new normal”, to be “in control of their own treatment” and to feel like they were addressing the “cause not the symptoms”.

‘Patients also commented positively on the “holistic approach” and explained that this put the “patient at the centre rather than the health professional or the treatment”.

One participant described the intervention as ‘genuinely life changing’, saying the psychological and physical impacts had resulted in her feeling ‘more energised’.

Three patients from the final 11 who received the fully-formed intervention were interviewed and their comments were subjected to a thematic analysis.

Though the paper’s conclusion states that the patients' feedback was ‘incredibly positive’, Dr Preece and his colleagues voice some caveats. For example, extending the number of physiotherapy sessions from a standard number of six might yield wider benefits, they add.

‘However, while encouraging, our preliminary clinical data does not constitute proof of effectiveness. Therefore, larger trials are now required to understand whether this intervention could bring about long-term improvements in the pain associated with knee OA when delivered either within the UK NHS or other healthcare settings.’

More research on the effectiveness of common orthopaedic interventions is vital, researchers say
Read More
Physios urge clinicians and researchers to work with patients to reduce flare ups of low back pain
Read More
In a PhysioUpdate Q&A, Chris Martey explains how you can learn more about spondyloarthritis
Read More
Make today the day your patients’ lives ‘will surely change’, MSK physiotherapists are urged
Read More
<< Back to News
By using our site, you acknowledge that you have read and understand our Cookie Policy and Privacy Policy.