Pelvic health physiotherapist Elaine Miller has never been comfortable sitting inside a pre-ordained professional box. She has courted controversy by using humour as an unconventional way to reach new audiences and reduce the stigma that has traditionally surrounded issues such as incontinence and sexual difficulties.

But with the recent publication of an article* – which she co-wrote with five Australia-based colleagues – in a highly respected public health journal, Elaine's approach has finally received some of the scientific backing that could encourage others to follow her lead. Here, she takes part in a Q&A with PhysioUpdate editor Ian A McMillan. 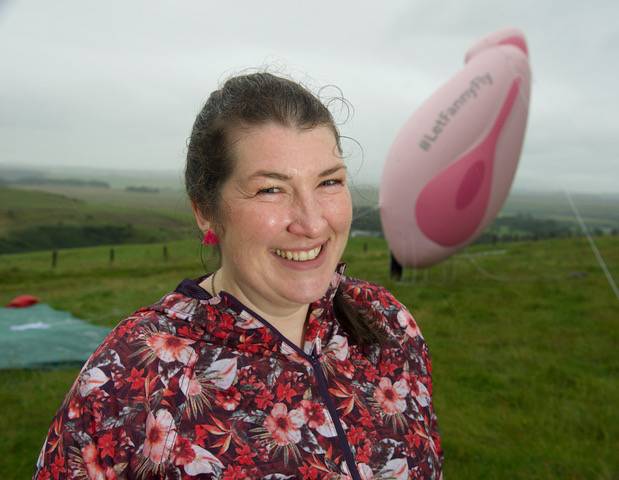 Do you think physiotherapy has traditionally had a ‘po-faced’ image? If so, is this changing?

I think all professions in healthcare have historically been solemn and earnest because dealing with people who are vulnerable or unwell is a serious business. I don't think that physio has been more puritanical than other professions.

I think the digital age has changed the way people communicate with health care, so, yes, there are now 'celebrity' healthcare practitioners with a huge reach and that is really helpful for encouraging engagement with health.

The basic principles of comedy, such as 'know your audience', apply in public health. Engagement and behavioural change are more likely if the message is funny to the subject than if it is not. And if you mess it up, you are sunk [Elaine Miller]

Some people might associate using humour at work with ‘clowning about’. Is that correct?

Dr Patch Adams was, I think, the first person to use actual clowning in health, and his work led to the Clown Doctors who have done amazing work in paediatrics, with refugee children and now in dementia care – so, I'd never diss clowning!

I'm not sure it's problematic for a team to be irreverent and upbeat at times, as long as they also know when to put the whoopee cushions away and that some people don't enjoy banter or daftness. Sophie Scott's work found that humour is a short cut to building a relationship and so it can be a useful therapeutic tool.

What were the three main things your study discovered?

We looked at 13 studies where humour was used to message on topics like mental health, cancer, safe sex and binge drinking. We found that:

So, what we found was that the basic principles of comedy, such as 'know your audience', apply in public health. Engagement and behavioural change are more likely if the message is funny to the subject than if it is not. And if you mess it up, you are sunk.

What are the implications for physiotherapy practice?

It means that we can be confident that humour is valid as a tool to communicate health messaging. I'd like to see whether that can be used to create therapeutic opportunities. We are all time-poor and patients often don't retain all that we tell them in clinic, so, if your patient has a sense of humour it might be worth capitalising on that.

What did the publication mean to you personally?

I'm thrilled to have the paper published, as it validates what I have been doing! I have learned a LOT about academia! Professor Monash's team are so welcoming and they really held my hand through the process. Doing comedy on stage is not the same as making a joke with a patient in clinic, and stand up can be seen as silly, even unprofessional, but I have 'anecdata' that giving evidence-based information from stage does encourage help seeking. This literature review means it's worth evidencing that.

If I can show that my show Gusset Grippers nudges help seeking behaviour then I can apply for funding for the pantomime (see below)! The problem with live comedy is that few people go to it. Though it's never going to be big enough to address the taboos which surround pelvic health and prevent help seeking, in the UK everyone knows what a pantomime is.

I've got a half-written 'Leaking Beauty' show which is the same principle as the stand-up shows, only with 'it's behind you' and 'oh no you didn't!' added. My aim is to tour the panto around the areas where women are missing from the data – we lack information on women living in geographically remote, culturally diverse and economically deprived areas. If I can get them to come to a pantomime then I can do an ICIQ on prevalence of symptoms and then a workshop after the panto to get ethnographic information.

Plus, I'd get to hang out with actors and learn how to embrace my inner diva. Forget blue m&m's, I want a vulva van.

* The article referred to in the Q&A is titled A systematic review of humour-based strategies for addressing public health priorities. It was published in the Australian and New Zealand Journal of Public Health on 19 August (with funding from a National Health and Medical Research Council grant). It was written by Elaine Miller, Heidi J Bergmeier, Claire Blewitt, Amanda O'Connor and Helen Skouteris. To see the article, visit: https://doi.org/10.1111/1753-6405.1314

Elaine, a fellow of the Chartered Society of Physiotherapy, has an interest in the women who don’t seek help for their stress incontinence – which is about 75 per cent of them. The barriers to help seeking need to be explored, and Elaine will launch a social media campaign on 24 September in an attempt to do that and hopes that by 24 December, Christmas Eve, the participants will be #DryByChristmas.

She says that up to 74 per cent of women with stress incontinence who do pelvic floor exercises from three to 10 times a day for a minimum of three months will regain bladder control. Elaine will post on social media three times a day to remind women to #DoYourPelvicFloorExercises. She describes the content as 'frank, funny and factual and aims to teach women what a pelvic floor is, what it does, why having a good one is smashing, and where to take theirs if it seems a bit wonky'.

Gusset Grippers, Elaine’s show about pelvic floors, won the Comedy Award at Fringe World in Australia in 2020. It features a prolapse chicken, a clitoris puppet, and a grand finale with a sparkly 5ft 4inch singing vulva. In August, her new show, Viva Your Vulva, enjoyed a sell-out run at this Edinburgh Fringe and was positively reviewed by critics and audiences.

Elaine plans to analyse the engagement data from #DryByChristmas and determine which content was most effective, and hopes to secure funding to run a formal public health campaign about pelvic health for women. She adds: 'This field is niche, but as one woman in three wets themselves, it’s a massive niche.'

Author: Edited by Ian A McMillan