At the end of January, I posted a tweet about a job advertisement (now expired) in the HSJ for a director of nursing, allied health professions (AHPs) and quality. Though the title of the job was not that unusual, it still struck me that executive responsibility for AHPs was essentially being tacked on to an already very broad remit.

The nursing and midwifery professions cover a wide range of clinical specialities and the idea that someone at executive level can adequately represent all of them is somewhat idealistic (though I understand there is a need for sensible limits on board numbers). However, for a single individual to potentially represent nursing, all 14 AHPs, and in some instances, all the psychological and social care professions is simply unfeasible. Yet this is the reality of executive leadership at all those NHS trusts where AHPs have any representation at all, and where that representation will be fulfilled by a registered nurse. 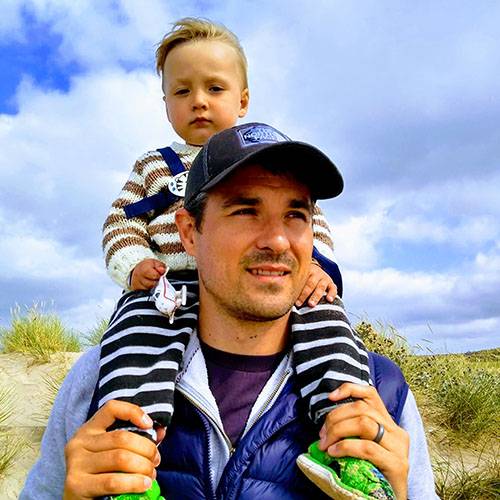 Chris Tuckett takes breath of fresh air on a walk with his son, Hector

Many people commenting on social media and in healthcare publications have stressed the importance of having professional leadership, for both quality of care and patient safety reasons. I, for one, do not think AHPs should be applying for clinical leadership roles that involve an oversight of the nursing professions. I believe it is important that, say, deputy chief nurse or chief nurse posts are filled by someone who is registered with the Nursing and Midwifery Council.

I also empathise with nurses who might feel indignant about being asked to regard an AHP as their clinical and professional representative, and that this feeling may be amplified if their executive lead and representative on the trust board was an AHP (except, of course, this situation would not arise in today’s NHS governance environment).

It is a strange fact that the 170,000 AHPs working in hospital and primary care settings are effectively blocked from being considered for executive director roles. This means that essentially the ceiling for aspiring AHP leaders in NHS trusts gets capped just below board level, and those wishing to move further up must seek opportunities beyond the delivery of healthcare services (such as with national bodies and partner organisations).

As a result, I suggest, we currently have a talent drain and a glass ceiling for aspiring AHP leaders, who, after all, have the knowledge to represent the interests of the NHS’s third largest workforce with expertise in rehabilitation, discharge planning, and in conducting functional assessments and promoting community independence. That list of attributes could be extended further and yet AHPs are unable to influence key strategic decisions at their trusts in a direct way.

To be clear, I admire and respect my nursing colleagues, whose skillsets, compassion, professionalism, and knowledge base keeps the NHS running day-in and day-out. Nurses are amazing deserve all the plaudits they garner from the public (of course, they also deserve more pay, but that’s another topic!). However, just as nurses may bridle at the thought of an AHP being their professional and clinical representative, then so too do some AHPs when faced with nursing representation. (I do not, of course, speak for every AHP).

So why does this happen? A few days after responding to the HSJ job advert I tweeted again, this time seeking clarification on the NHS governance arrangements. Legislation is often cited as the reason for the lack of AHP representation at trust board level and I wanted more evidence of this. My tweet received several responses, and the HSJ contributors I tagged in (chosen for their general expertise on all things NHS governance) seemed to concur with my opinion (bolstered by some admittedly modest research on the topic on my part*) that the present governance legislation was both vague and unclear.

In my tweet I quoted legislation from the 1990 National Health Service Trusts (membership and procedure) Regulations, which state that hospital trusts should have up to 11 directors, one of whom should be a medic and one a nurse or midwife. Though the legislation did not appear to specifically exclude AHPs, with a maximum permitted number of directors and the need for this to include both executive and non-executive directors, then the exclusion of an AHP executive may be dubiously justified.

Yet it seems this piece of legislation is not the pertinent one, and I learned that foundation trusts are governed by a different set. I turned to the 2006 National Health Service Act, which apparently consolidated all previous legislation pertaining to provider organisations into a single act and remains the pivotal piece of legislation. Within this act, foundation trusts are referred to as ‘public benefit corporations’ but, nonetheless, it again sets out clear stipulations for the constituent parts of an executive trust board.

Schedule 7 of the act states that there must a medic executive lead and one who is a registered nurse or midwife (again, there is no stipulation that an AHP cannot be part of the trust executive committee). Also, in a display of the greater freedoms enjoyed by foundation trusts, there is no limit on the number of directors who can be appointed. The legislation notes that: ‘It is for a committee consisting of the chairman, the chief executive and the other non-executive directors to appoint or remove the executive directors.’ (schedule 7, 17 (4)).

Time to raise our ambitions?

Our ability to influence the decision-makers has grown immeasurably over the years, and the AHP voice within the wider NHS is a strong one, but ... it’s about time we raised our ambitions a little higher [Chris Tuckett]

So, it seems that trust boards, regardless of their foundation trust status, could choose to appoint an executive AHP director, and that foundation trusts enjoy more leeway to do so. It would appear to be a matter of board priorities rather than legislation that currently results in the dearth of AHP executive director roles. It feels to me that there is a need for professional groups to join forces and make enquiries about these roles in our own organisations. If our nursing colleagues could do the same on our behalf, then we may start to see a move away from AHPs and nursing roles becoming blended at sub-board levels too.

If trust boards continue to prioritise a multitude of executive director roles (such as director of strategy, director of transformation, director of planning, director of people) but apparently cannot see the value in the appointment of an AHP executive director, then have we as a profession failed to demonstrate our unique value? Our ability to influence the decision-makers has grown immeasurably over the years, and the AHP voice within the wider NHS is a strong one, but at organisational level it’s still constrained and it’s about time we raised our ambitions a little higher and sat at the table with our organisation’s decision-makers.

*The legislative landscape is complex, and this article represents my own interpretation. I am happy for any of my mis-readings or misinterpretations to be pointed out to me and corrected.

Physiotherapy's future is on the line, says New Zealand-based 'critical thinker' Dave Nicholls
Read More
How to improve your resilience and avoid burnout during the 'uncertain times' we live in
Read More
Chris Tuckett's job title includes AHP - but that doesn't mean he downplays his physiotherapy roots
Read More
<< Back to News
By using our site, you acknowledge that you have read and understand our Cookie Policy and Privacy Policy.